Client names and personal details have been changed to protect client privacy and identity. Photos do not depict actual clients. 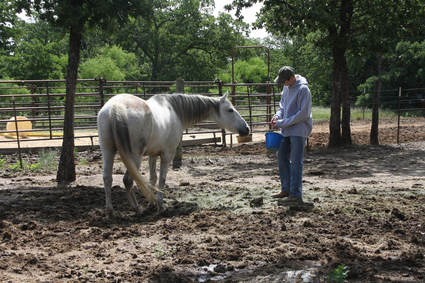 Anthony could not remember the last time he had had a friend. Despite his chronological age of 16, he often acted more like he was 8 years old due to a brain disorder. Anthony struggled to communicate with others and often became very angry and violent when they did not understand him or when he did not get his way. Anthony had suffered past physical, emotional, and sexual abuse which further complicated his interactions with others, believing that most people could not be trusted. His mother and teachers were at a loss of what to do with Anthony. His behavior had become so aggressive that his mother felt she had no choice but to institutionalize him. Equine Assisted Counseling appeared to be the last resort before his mother would take more extreme measures.

In his first session, Anthony appeared personable and confident. He informed his counselor that he knew about horses already and knew how to handle them. Upon entering the pasture, Anthony immediately began aggressively following and chasing the horses to the point that they began to run from him. Anthony explained to his counselor that you have to “show the horse who’s boss” to earn their respect. It became clear, however, that the horses were not learning to trust Anthony but learning to fear him. In reaction to his past trauma, Anthony needed to feel powerful to feel safe.

One day, the treatment team tried a new approach with Anthony. They had a discussion with Anthony about the horse’s role as prey animal. Anthony had already learned in school about prey animals and predators and immediately identified himself as a predator. Anthony then suddenly realized that the horse he had chosen, Sierra, was not going to trust him if he was chasing her – she saw him as a predator. He then described how she must see him as a lion when he chased her from behind and an alligator when he ran up to her from the front. Anthony felt bad that he had scared the horse as he had only been trying to earn her respect. Anthony immediately transformed how he interacted with the horse. Instead of chasing Sierra, Anthony softened his body language and spent time just petting her. He became concerned with her well being and spent the session just collecting hay for her to make sure she would be well fed.

As therapy progressed, Anthony began sharing some of his own experiences through Sierra. He talked about how Sierra paid attention to everything and everyone because she felt scared. He described her careful attention to sounds that might indicate something scary was going to happen. Eventually, Anthony was even able to discuss how he felt scared of making a mistake or doing the wrong thing. Anthony’s time with Sierra was invaluable in helping Anthony to form one of the first relationships in which he felt safe to explore and take risks to interact with others in a new and healthier way.

James' Story as an Army Veteran 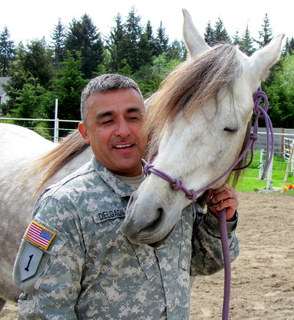 James, a 40-year-old Army veteran, was once a man suffering from crippling posttraumatic stress after his patriotic service to our country while in Afghanistan. In addition to experiencing flashbacks, anger issues, and feeling disconnected from his family, James also experienced intermittent blindness - a condition the doctors could not explain. His world was crumbling, as he could no longer work, attend school, or provide for his family. James' teenage daughter avoided him at home and James rarely left the house. James came to counseling feeling very frustrated and scared.

Today, James has regained control over his life, and his vision. You might assume that is the result of the resources offered to men and women like James. You might assume that his recovery and improvement is the result of traditional mental health specialists working with James over a long period of time to help him process his experiences, his memories, and his emotions. What if I told you that the reason James is now healthy was because of a special relationship with a horse named Duke , and an alternative therapy process called Equine Assisted Counseling?

Duke, believe it or not, is an expert at reading and responding to the most subtle changes in body language and emotional state of clients who worked with him. Duke, in fact, had his own form of posttraumatic stress from a traumatic trailering accident when he was a young horse that resulted in his face being permanently disfigured. Unbeknownst to either James or Duke, they had a shared experience that each could understand in their own way.

Through his work with Duke, James began to identify the more subtle behavioral and physiological changes in his body when he was triggered. As he learned coping skills by working with Duke, he gradually began to feel as though he had control again.  The real breakthrough came in a moment when James finally broke down and Duke literally tried to envelop, or "hug", James and console him. That was the powerful day James finally began to feel empowered in managing his posttraumatic stress.

James is a real man but he is also a representation. He represents millions of veterans who are suffering from the emotional trauma of serving the country in more than a decade of war and as well as veterans from wars past. We have all heard stories of the trauma these veterans endure and know all too well that many of them are suffering. We would like to think we have the resources to serve these veterans and help ensure that they have a guided path back into civilian life. The sad truth, though, is that our mental health services fail to reach too many like James. These veterans are desperately in need of care that is affordable, accessible, and administered in low-stigma settings. At least 30% of Iraq and Afghanistan veterans alone suffer from posttraumatic stress, depression, or traumatic brain injury. Many of these individuals go untreated or drop out of treatment prematurely. This is why viable, and proven, alternative therapy options, such as those offered by STEPS, are crucial to reconnecting veterans suffering from posttraumatic stress with their communities, their families, and themselves.
Photo Credit: PATH Intl. 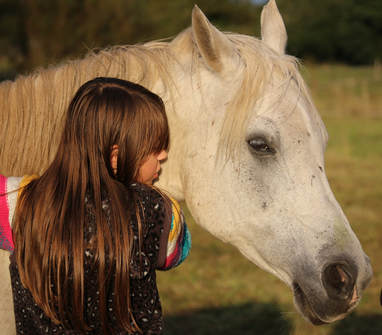 Kate, a timid three-year-old, made her way to the outdoor play therapy area. She said nothing as she trekked her usual path to the toys and the miniature horses she saw every week. Kate carefully chose the toys she wanted to play with and settled into the dirt, toys in her hands. The play therapist and equine specialist sat on nearby benches, watching intently as Bandy and Buttons, two miniature horses, made their way slowly to Kate’s side. Standing on either side of her, they turned toward Kate, as if watching her play, their noses just above the top of her head. Every few minutes, one of the horses would briefly nuzzle the child. Kate seemed entranced in her play. Later, Dazzle, a miniature donkey, would follow Maggie, a small mule, to the play area. The play therapist and equine specialist observed the two animals move into place just in front of Kate, creating a barrier between the adults and the child. Each time the play therapist moved to see the little girl, Maggie would move too. It was as if the four animals had created a protective circle around Kate and the little girl didn't seem to mind. She seemed at ease with the animals so close to her while she played.

Kate’s parents sought counseling so she would have a safe place to process her feelings. At home, the parents often communicated violently and aggressively with each other and believed Kate was unable to hear these exchanges. The animals seemed to sense that Kate needed protection as evidenced by how they encircled her.  When the play therapist commented to Kate that the animals made her feel safe and protected, Kate would often nod and reach to pet a horse. Her tantrums and outbursts at home have been significantly reduced. 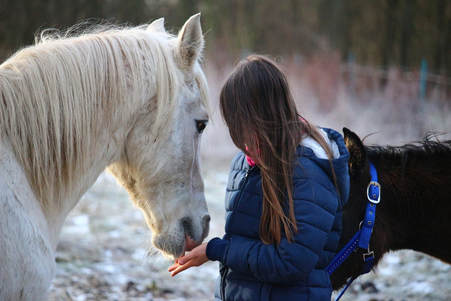 Jamie was a teenage girl who came to counseling to work through issues related to anxiety and depression. Jamie had a history of cutting and other self-harm behaviors and had been hospitalized for suicide attempts. She reported feeling worried much of the time and experienced frequent panic attacks that often resulted in her having to leave school. Jamie also had been sexually assaulted by a classmate at an after-school party.

During Jamie’s first visit, she chose a horse named Cinnamon. Jamie said that she felt drawn to Cinnamon because she seemed calm and friendly. Over the course of the first few weeks, Jamie began to notice that the ways in which she interacted with Cinnamon paralleled the way that she interacted with people. Jamie began to identify her challenges in seeking to always please others and not feeling able to express herself. As time went on, Jamie began to try to challenge these patterns by testing new ways of communicating and being assertive with Cinnamon and later began to communicate more effectively with other people as well. As Jamie’s therapy progressed, she began to feel comfortable enough with Cinnamon to begin to process traumatic events from her past. The more Jamie was able to talk about the things that had happened to her, the more at peace she felt.